A year ago today a documentary about this case, Children of the Snow, aired on Investigation Discovery. It is now available on Hulu. If you haven’t watched it, you should. https://www.hulu.com/series/children-of-the-snow-e5670464-7adc-4907-80c1-9f38ce17ee82

Please read this letter from Michael Farquar, sent to Governor Gretchen Whitmer on December 5, 2019, about the reason for his participation in the documentary. I received permission from Mike to publish this letter on the one-year anniversary date of the documentary airing. When I copied it, the file name said “Justice for all.” In Michigan it seems it is often “Justice for none.”

Governor Whitmer did not respond to Mike’s letter. Her office did, however, send him a generic holiday greeting a few weeks later. Let’s hope 2020 brings some answers and some peace. Let’s hope law enforcement makes it a priority to actually work on the tips that have come forward in the wake of Children of the Snow. As Mike says in his closing:

“My family and I have already felt the wrath of public exposure; wrath that was never visited on the perpetrators of these crimes or the investigators and agencies who failed to bring anyone to justice. Someone at the highest levels of Michigan government needs to evaluate what has taken place here out of a sense of justice to all the child victims and to ensure nothing like this is allowed to fester in Michigan ever again.”

“I appreciate your interest in the solving of the Oakland County Child Murders that occurred in the mid-1970s.”

Here is a copy of a letter dated March 29, 2001 from the late Det./Sgt. Ray Anger to the late Helen Dagner:

A few observations. First, at least Anger was smart enough to respond to Dagner’s information. And in writing! When does that ever happen??? Second, John was alleged to have held more than one passport and to have engaged in passport doctoring. Also, good excuse. Busch tried that one, too, only he got his dates wrong and turns out he returned from Europe in plenty of time to abduct or hold Mark Stebbins in February 1976. On March 16, 1977, the day my brother was abducted, an Oakland County divorce court ordered that John’s parents could proceed with the eviction of the adult son (him) and that the home on Tuckahoe, just a stone’s throw from Busch’s parents home on Morningview Terrace, could be put on the market for immediate sale at an offset price with no broker. The house was sold on March 24, 1977.

Maybe the parents were getting the job done while the adult son was in Europe. Funny thing is that the family when interviewed about this seemed to give different dates and explanations about how he got to Europe.

When he was questioned in 1977 there was apparently no mention of Europe or a passport. We now know that a potential participant’s alibi for a time period relating to just one of the abductions is about as good as the fact that he did not drive a blue Gremlin. And we all know now how well the MSP did with polygraphs back in the day.

There has always been speculation that a cop had to be involved in these crimes. But is it just as likely that it was so easy to stay one step ahead of police in this case, that of course the abductions continued with impunity?

I called a cop to ask about John years ago and he said “Cathy, you can make anything fit if you try hard enough.” Like maybe this?:

“Busch was a fun guy to be around and wasn’t violent.”

In the words of a contemporary of the ubiquitous Vince Gunnels back in the day. This doesn’t sound like fun to me:

It was prefaced with “Thought you could use a laugh.”

How about silence, Governor Whitmer? Silence from a law enforcement agency that reports directly to you. And silence from you in the face of letters from living victims of pedophiles who operated with impunity in Michigan and constituents who want to know just where this case is or if if is stalled out forever. Or, of course, the “call the state police and have a good day” responses, which amount to silence.

SILENCE ENCOURAGES THE TORMENTOR, NEVER THE TORMENTED. Just ask any of the living victims of pedophiles and pedophile rings in your grand state.

And here’s an interesting email from the late Helen Dagner to someone who was sharing information with her about a possible suspect. Dated August 27, 2007, it would be a few months before the names Chris Busch, Greg Green and Vince Gunnels came to light in a new way.

Almost 13 years later, we sit waiting for that needle-in-a-haystack DNA hit (it would help if they would actually use the most cutting-edge procedures) to someone whose DNA can probably only be accessed through genetic genealogy. 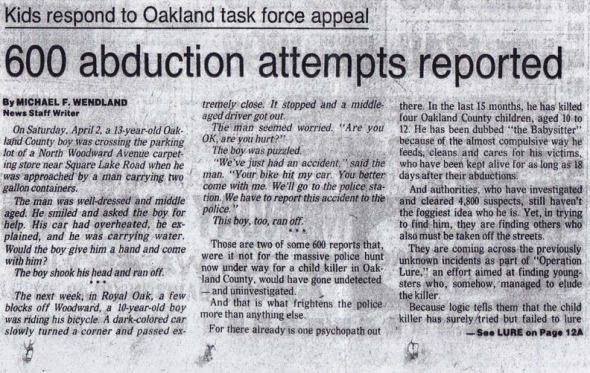 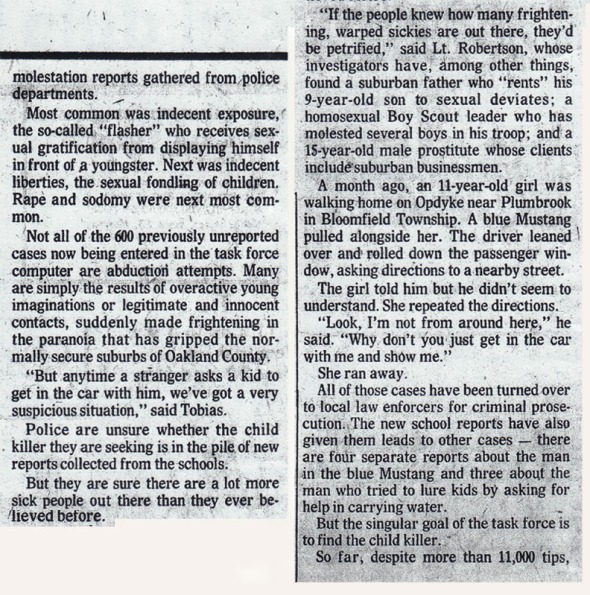 First case in Illinois in which genetic geneology was used to solve a 1976 murder.

Berlin said that in 2001, biological evidence from Maurer’s body was analyzed and the DNA was added to the county’s Combined DNA Index System (CODIS) system, but no matches ever came up. In 2019, experts used DNA phenotyping to determine characteristics such as the suspect’s facial traits, eye color and appearance, and create a composite image of Maurer’s killer. A public genealogy database was used to build a family tree to help identify potential new leads in the case.

The information led police to Bruce Lindahl of Aurora, who died in 1981. Lindahl’s body was exhumed Nov. 6, 2019, in an attempt to get DNA to compare with the evidence collected from Maurer’s body.

Lindahl’s DNA came up as a match for the DNA found on Maurer’s body, authorities said.

As a result of the discovery, police believe they can now link Lindahl to other victims. “We have evidence that there may be other young women who were victimized by Bruce Lindahl between 1974 and his death in 1981,” Berlin said.

Law enforcement followed the methods used in 2018 to identify and arrest the Golden State Killer/East Area Rapist in California.

Thank you to a reader for sending this link.

1. 1976 case.
2. Look at the efforts made by this small, suburban police department over the years to solve this young woman’s murder case.
3. Press conference to announce the resolution of the case by the DuPage County’s State’s Attorney even though this piece of shit is long dead. He died in 1981 when he accidentally cut his own femoral artery while fatally stabbing an 18-year-old high school student. There’s some Karma for you.
4. When Oakland County officials and the FBI exhumed David Norberg in Wyoming for DNA testing in 1999 they found his DNA “did not match pubic hair found on 11-year-old Timothy King . . . ” https://billingsgazette.com/news/state-and-regional/wyoming/dna-does-not-link-wyoming-suspect-to-child-killings/article_09bf037b-a13a-57e3-b2a2-da97f541bcf2.html. No mention of the hair found on Kristine. No mention of the hair found on Mark. No mention of the hair found in the “Pontiac debris” (Arch Sloan’s red, 1966 Pontiac Bonneville). So now that these hairs have all magically appeared, how about treating them the way they did in the Golden State Killer case and the murder of this young, vibrant high school junior in 1976?

WHY HAVEN’T YOU DONE THIS? If this hair evidence cannot be evaluated in the most cutting-edge way possible (we’ve talked about this before . . .), tell us why! If you have multiple hairs (Mark, Tim, the hairs in the Pontiac) and they all are from the same source, as you have told the public, there should not be an issue with extinguishing the evidence. You have more than one hair.

Are the OCCK victims not worthy of figuring out how to use genetic geneology in this case? How can you justify not making the attempt?