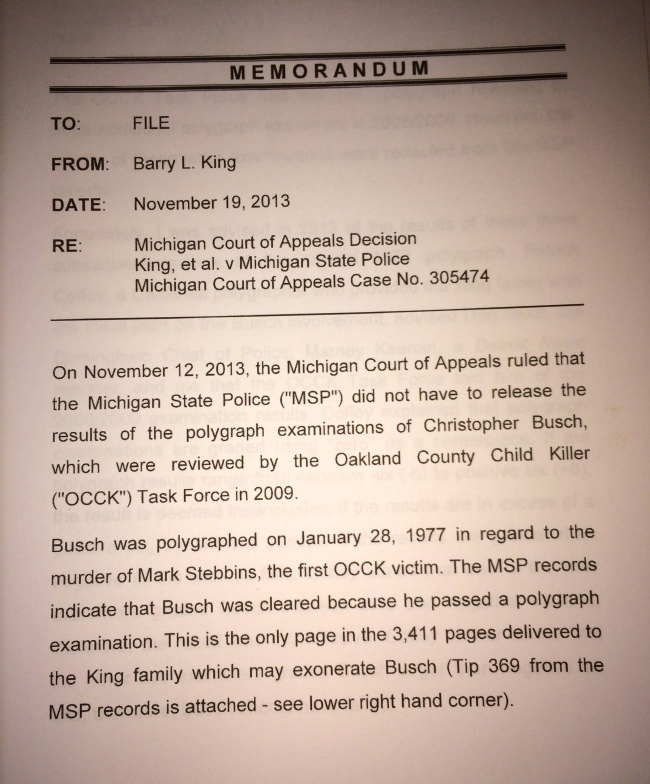 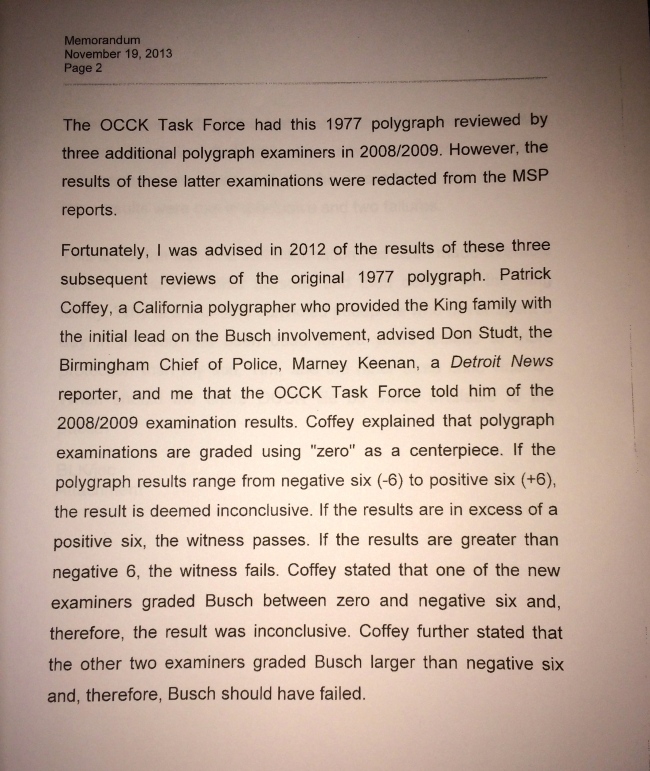 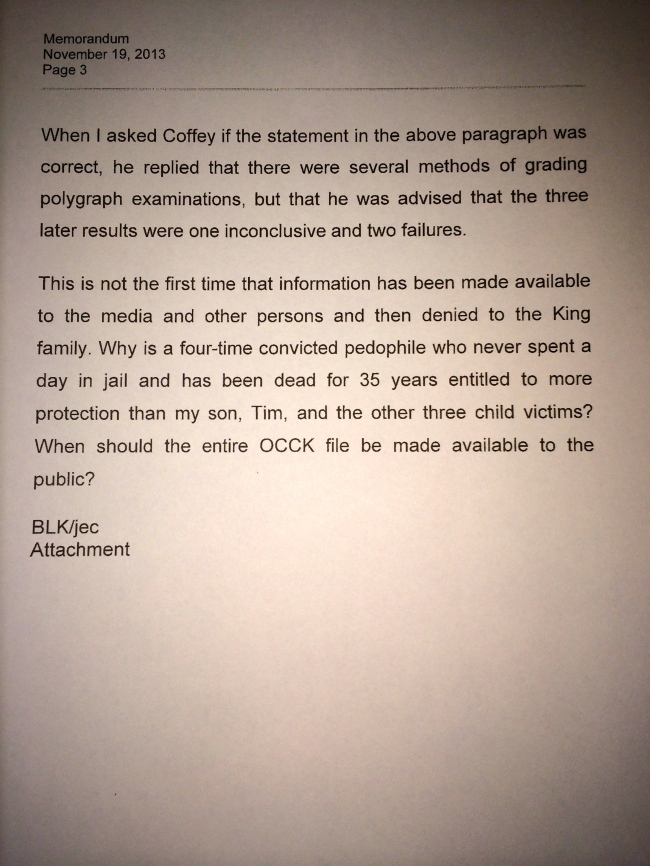 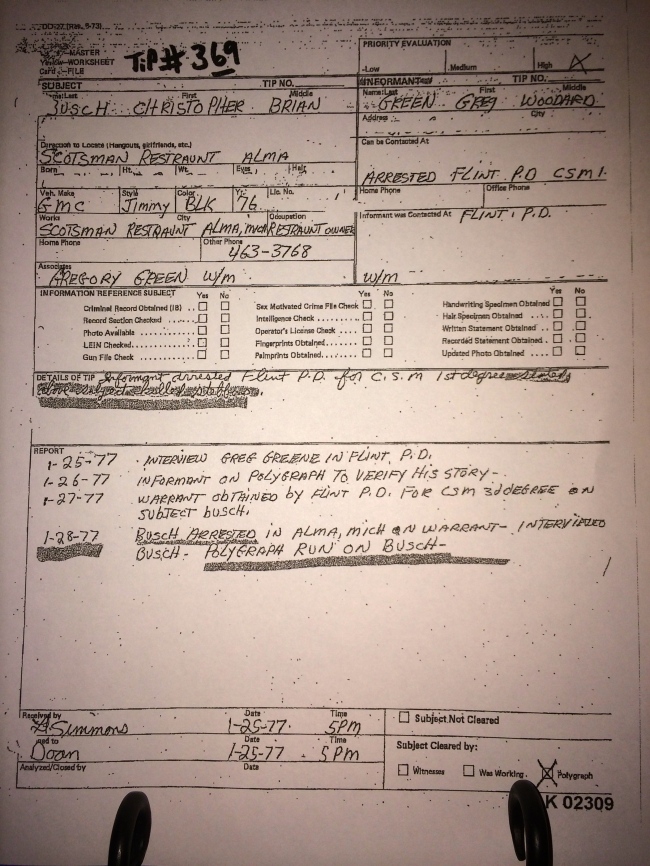 Most observers misinterpret my position on the OCCK case. When Cooper asked Studt to call me on March 1, 2010 to tell me Busch and Gunnels were not involved I had only seen documents presented to me by Heather Catallo. These public documents had been denied to my family. I have used the term “involved” rather than “murdered” regarding the Busch involvement. All we have asked for in the reason for overruling the conclusions of Williams and Gray that they were the leading suspects and could have been charged if Busch was still alive. NO ONE HAS SUBMITTED ANY FACTS CONTRADICTING THE CONCLUSION THAT BUSCH AND GUNNELS WERE INVOLVED!

We have always acknowledged the validity of the Sloan lead. After 3 ½ years nothing has developed on this lead. Sloan is still being treated as a normal prisoner rather than as an uncooperative one. We have heard rumors that there has been little or no follow up. The continued references to the blue Gremlin do not support the Sloan investigation. The way we have treated since March 1. 2010 is deplorable. Why did Cooper terminate all contacts with Worthy? Why did the MSP switch allegiance from Wayne County to Oakland County after the October 27, 2009 conference? Why did the MSP refuse to talk to Williams and switch allegiance to Oakland? Why did the OCP refuse to release the search warrant affidavit which was prepared by her office and signed by the MSP? Does this lack of information legitimately give rise to concerns of a cover up of major pedophile activity in the 1970s? Review the Chapter in the DVD on the blue Gremlin! Who can review the actions of the current and past Prosecutors for possible improper behavior?

For 30 years the victims kept their mouths shut and trusted law enforcement. The case is now 37 years old and would not be in the papers or on TV today if it were not for the King family trust in the media to raise the above issues. I will never understand how the prosecutor ignores her constitutional obligation to confer with victims and gives the media access to the same information she denies me. The next time she uses Channel [*] to present her side of any portion of this case, ask her how she interprets the constitution. She should not avoid this answer just because she was not challenged by anyone when she ruled her own court room.

This case is such a rip current for me.

Lots in my in box to address in this case.  Starting back at it.

From a recent email I received

I finally had a chance to watch the DVD; something that required baby steps the whole way through.  Power, powerful stuff.

I know I mentioned it before but, your dad’s 180 from the, “cops are in control” is nothing short of remarkable.  At his age and with the mindset he accepted for decades, it would have been easier, more comforting anyway, to remain status quo.  Instead, he got on the horse you brought to him and he has taken the reins like a cowboy (wow, that was a painful simile. .. sorry). To liken you to the girl who kicked the hornet’s nest is dead on.

It would be impossible to lay this out in any cohesive chronology.  I think of this whole like more like a jellyfish.  A gelatinous blob that floats along the currents; tentacles that dangle from the core, intermingling, tangling, and threatening anyone who dares brush against it. Very little of what was presented was new to me and what was new was mostly information I had forgotten.  So, with none of this “earth shattering” in and of itself, the DVD still managed to shake me awake once again.

It’s one thing to have been there is real time.  To have the email exchanges, the telephone conversations and information sharing take place as they happen was bad enough but, to watch the same events unfold in 6 hours was numbing.  In that context how could anyone NOT recognize the massive mess-ups, cover-ups and general haphazard, slip-shot investigative efforts.  Good God people, talk to each other!

The presentation hits its mark over and over.  The intent is not to nail Chris Busch but to use that particular tentacle as an example of just how inept the investigation was and how devious Jessica Cooper must be.  The usual suspects are having their fits that it failed to focus on anyone else, information was wrong and that “whoppers” were told.

None of this serves to bring the case forward, though. Your father deserves answers.  You, Chris and Mark deserve answers.  The public deserves answers.  It would be so simple if those in control would just talk to each other and stop trying to cover their own asses.  I am reinvigorated and recommitted.  What can I do?  I will do it.  I’m ready. . .let’s go.