More horror. The Lamborgine/Lawson investigation as of September 2006 – February 2007.

IF YOU HAVE INFORMATION ABOUT THE OAKLAND COUNTY CHILD KILLINGS OR RELATED CRIMES PLEASE CALL THE TIP LINE AT 833-784-9425.

The Lawson/Lamborgine investigation continues to reveal tentacles in the Detroit suburbs. Page 89, lines 37-48, December 2006, reveals a 1977 victim of Lamborgine who called police after he saw press on Lamborgine. He will later appear in the Busch investigation as he was a victim of Busch and later a lure for Busch and Greene. This victim will later tell police that Busch forced him to have sex with a boy who looked like Tim King; that he saw a photo of a boy who looked like Tim King tied up in the back of Busch’s car; and that after the sexual encounter, he was with Busch when dropped Tim King off at Lamborgine’s house.

Remember, at this time in the investigation the names Chris Busch, Greg Greene (and Arch Sloan, for that matter), have not yet surfaced. 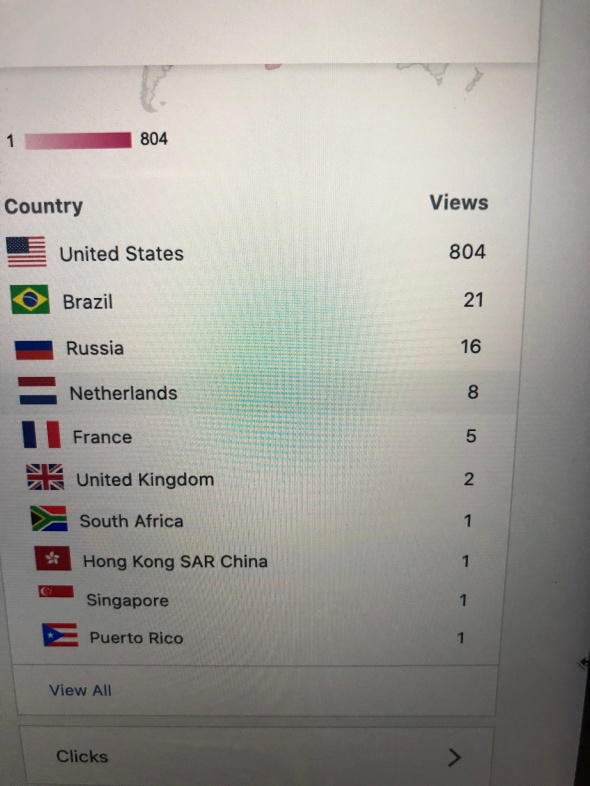 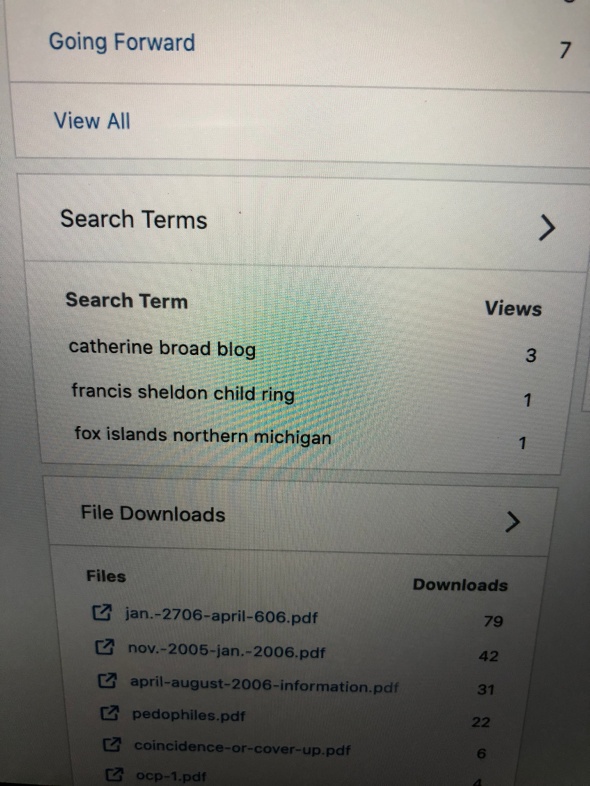 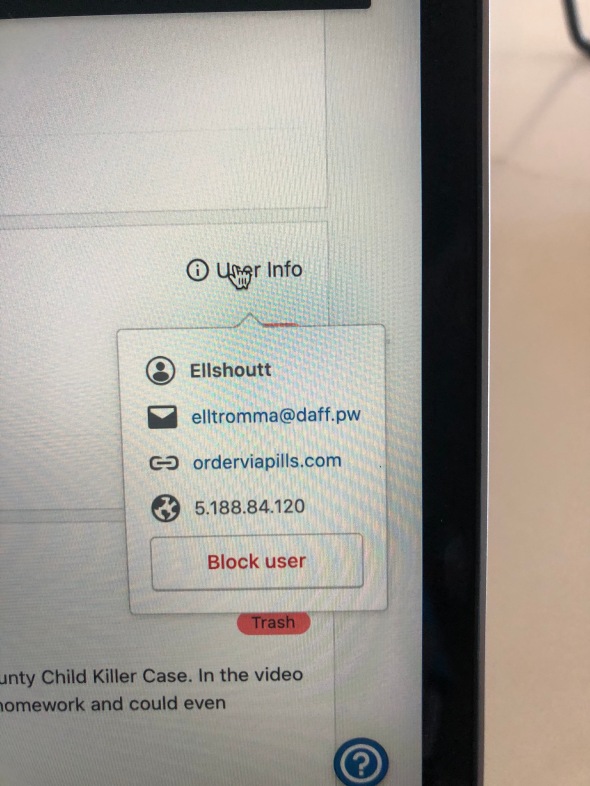 Just so we are all on the same page. This is what shows up in the driver’s seat of my blog. Word Press is a decent platform. There are glitches and I am working on figuring that out. But it spits out some interesting user information.

The search terms are always interesting. Almost every day they contain “Frank Shelden” or “North Fox Island.” Another big one is “Christopher Busch death photos.”

I use this spammer as an example of what shows up on site users. Because he is selling little blue pills, I figure all privacy bets are off.

I was checking the admin function of the blog just now (something I rarely do, but should start doing daily) and a number of comments were in the “pending” file (waiting for approval) and some in the “spam” folder were not spam. I apologize. This probably accounts for the difficulties some people have had in getting their comments posted immediately.

When I started the blog I did not set up the comment function. I wanted to avoid what happened on Topix and other websites with in-fighting and vaguely threatening and irrelevant comments. Then I set up the comment function with an approval filter, so there was always a delay in comments (and I would often forget to check). Then I allowed any post to be immediately published, but that caught up the people who were sending me information they most certainly did not want published. After a few people had posts go through that they did not want published, I went back to the approval process.

Too many posts got diverted that way, so I went back to the immediate post function. But clearly some people continue to get diverted into the “holding tank” area. I apologize. I will check those folders more regularly. I was not ignoring you on purpose.

Then we have the other end of the spectrum. I told you shit was gonna get real. If you post or subscribe and you fuck with me, I will send your ISP and IP information to law enforcement. I’m done with bullshit. Stick to the facts.

In keeping silent about evil

In keeping silent about evil, in burying it so deep within us that no sign of it appears on the surface, we are implanting it, and it will rise up a thousand fold in the future. When we neither punish nor reproach evildoers, we are not simply protecting their trivial old age, we are thereby ripping the foundations of justice from beneath new generations.

IF YOU HAVE ANY INFORMATION ABOUT THE OAKLAND COUNTY CHILD MURDERS, CALL THE TIP LINE AT 833-784-9425. Keep calling until you get a call back.

Pedophile Rings and the teenage lures they had in common may inform the solving of the OCCK crimes.

I am going to start this post with two quotes. The first is from an unidentified author in a book called “Morals and Dogma of the Ancient and Accepted Scottish Rite of Freemasonry (1871 & 1905):

“We cannot understand the moral Universe. The arc is a long one and our eyes reach but a little way; we cannot calculate the curve and complete the figure by the experience of sight; but we can divine it by conscience, and we surely know that it bends toward justice. Justice will not fail, though wickedness appears strong, and has on its side the armies and thrones of power, the riches and the glory of the world, and though poor men crouch down in despair. Justice will not fail and perish out from the world of men, nor will what is really wrong and contrary to God’s real law of justice continually endure.”

These two quotes are important considerations before reading what will follow.

A reader sent a link to this collection of film footage from back in the day on the OCCK case. https://www.youtube.com/watch?v=dzk55lEGBbo&t=315s. If the video starts midway, go back to the opening with Walter Cronkite. In news footage, Robert Robertson, commander of the OCCK task force in 1977 and 1978 explains that investigations had uncovered a huge number of pedophiles in the metro-Detroit area. He explains “[w]e knew we had a problem but we didn’t recognize it as such.”

Wow. Pretty big miss, as you will read over the next posts. The FOIA documents you have read thus far hint at the involvement of multiple pedophiles operating in the concentric circles around these child murders. Fifteen years ago (15!!!), Wayne County confronted the dark times of pedophelia and child pornography back in the 1970s. Richard Lawson rattled some cages when he tried to save his sorry skin after being arrested in 2005 for the 1989 murder of a Livonia man. He gave Livonia police the name of Ted Lamborgine.

Lawson was convicted of the murder of Exavor Giller and sentenced to life without parole. He gave police plenty of information relating to his contention that Theodore (Ted) Lamborgine was the Oakland County child killer. As part of their investigation, many underage victims of sexual assault were identified. https://www.bgfalconmedia.com/ohio-man-sexually-assaults-juveniles/article_f4f9cb0a-117a-5631-8fe5-ab138e70f18d.html. Lamborgine and Lawson were both convicted in Wayne County for numerous sexual assaults against a total of 14 boys. Lawson died in prison and Lamborgine will never see the light of day as a free man again.

Here’s a refresher on how the focus was turned to Ted Lamborgine:

So let’s back up on the FOIA documents to 2005 after Lawson has tried to dime Lamborgine for the child killings. The story is set out very well below and will take a few posts to complete. It is slow going because due to the number of victims of these monsters in Detroit and surrounding areas, I have had to make additional redactions.

This is nightmare material. Quite literally. But you will also read about real courage and unbelievably hard work.

Names continue to surface. Multiple people may well have been involved in or have knowledge of. these child abductions and murders. No DNA match has yet been made to hair evidence found on two of the victims. Pedophiles will offend for the rest of their lives if given the chance. If you have information about the Oakland County child murders or activity you believe may be related to these crimes, please call the tip line at 833-784-9425.