Back to 2005; “It would be so nice if something made sense for a change.” Alice in Alice in Wonderland.

I told you from the very beginning chrono-order won’t work that well here.  And I know even if it was in chronological order, some of it still wouldn’t add up unless we were talking face-to-face.  In 2005 and 2006, I fell down the rabbit hole in this case–something I had struggled hard to avoid for decades.  Many, many people I have crossed paths with on this journey are empathetic.   A fair number of people I am relatively close to, and would expect more of, are staggeringly uncool because they can’t go near it.  I get it.  You don’t know that I get it, but I do–because I was once on the other side of the rabbit hole, just like you.  And I hope you never fall in to anything similar.  I wouldn’t wish it on anyone.

Having left off on July 2, I wanted to paint a picture of how this case opened on my front door in 2005, soon after I moved back to the Midwest after more than 20 years happily living way, way west of all of this.  I’m going to start with a letter I received in March 2006, less than a year after I had moved back to the Midwest and will continue with the correspondence that marks what would be a most remarkable two years.  I like posting the actual correspondence so you can see how it played out, but I will fill in the gaps.  I will be redacting where necessary to protect the innocent or people I feel fall more on the innocent scale.  You will still get the picture.  Starting with the letter I referred to in my post of July 2. 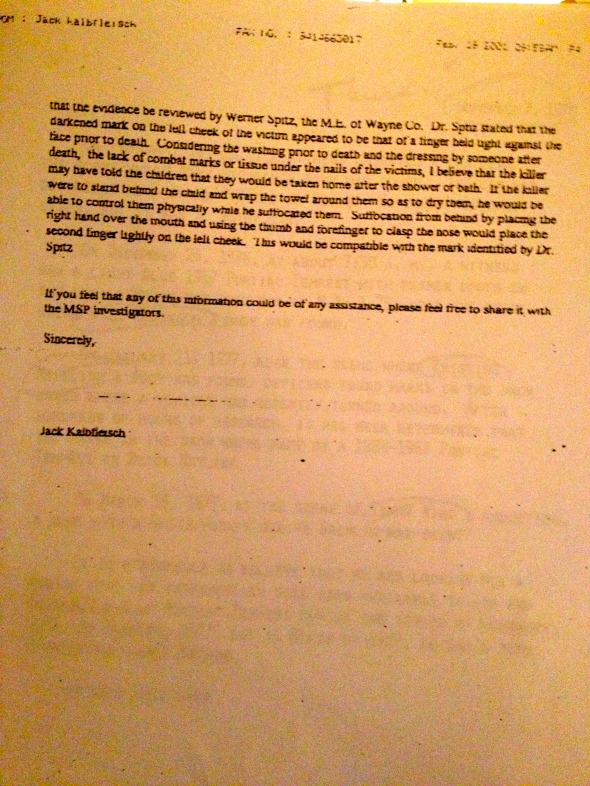 Now I can get back to where I left off a few weeks ago–trying to explain how, after three decades, this case ended up back at my front door. Then this stuff will make more sense. 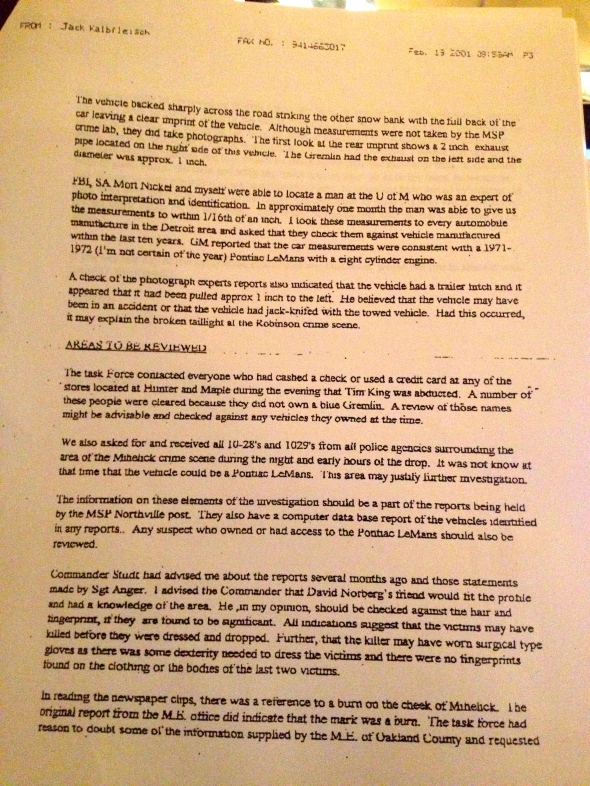 From the Correspondence Grab-Bag

I have been asked by a few people to address the ubiquitous Blue Gremlin issue and the fact that the MSP and FBI squelched all info relating to the Pontiac cars mentioned by witnesses in the abductions and body drop-offs of Mark, Jill, Kris and Tim. Here’s a start. Page one of three. Dated July 20, 1996 or ’98. Copy quality is poor; this is the best I can do.

Ok, this is all highly distressing.  I am going to review it and consider disseminating on my blog.  Even if you assume that Mark Stebbins’ abduction and murder investigation was adequate, any cold case investigation with any cred would have started right there as a starting point with the MSP.  Jesus, the ball got so dropped.  By the time Mark’s body was examined, his clothing had all been removed by the suburban cops investigating his murder.  I am a lay person, but I have a number of text books written by experts about cold cases.  They all say the same thing–start at the beginning and pick it apart.  Who picked apart Mark’s abduction?  NO ONE.  That’s why three (and probably more) kids got abducted and murdered.  Down the road, it all gets thrown against the wall and, go figure, nothing sticks.  Nobody in Ferndale gets the job done investigating and then no one in Southfield gets the job done.  And then the stage is set for every other kid who gets abducted, tortured, raped and murdered by whoever is doing this.  Jesus.  Is it that hard?  Go back to the beginning.  My god.
Aaron, I don’t agree with a lot of what you say or how you have approached and dealt with me, and I am not going to get sucked back into this, but I will say that you are making some points that someone should pay attention to.  My own opinion, which none of you care about, is that the Ferndale, Southfield, Royal Oak, Troy, Berkley, Franklin Village, and Birmingham PD investigations were all completely inadequate.  These PDs were completely ill-equipped to deal with such crimes and could have easily asked for help from Detroit PD.  The result could have been fewer victims.  This is something that is true to this day and should be embraced by these agencies that dropped the ball.  Nobody wants to pull back the curtain.
All serious cold case investigations start at the very beginning.  No one ever did that here.  I could find five experts who would speak on camera that the ball was dropped here early, big time, and often.  But nobody cares.
Again, I have no power in this investigation; this is all very painful, but somebody better start paying attention to something here.  If it happened then, it can happen again.  The MSP, the FBI and other agencies who should be exerting effort, are not.  This is the saddest, most pathetic exercise of energy to cover asses that has ever happened.  It has been expended to cover the abduction, torture, rape and murder of innocent children.  It is crazy-making and it is unconscionable.  These agencies are just damn lucky there are so many of us they can point to and accuse of being crazy.  Stringing this to every other serial killer in the U.S.?  Not buying it.  But every single one of these people who contact me have a point.  THE BALL GOT DROPPED AND ANYONE WHO QUESTIONS WHY THAT HAPPENED GETS PEGGED AS CRAZY.    Four dead kids–and probably more–get stepped on yet again every time one of these agencies drops the ball or screws someone over who tries to bring information to light.  Media outlets are prone to keep their LE sources happy.  I get why they keep that mindset.  Dead kids can’t complain, but prosecutors and cops can.  It is all sickening.
Cathy Broad

Bear with me here; email I received today.

Holy SchNIKEees!!! I’m guessing this is one of the many reasons the FEDS covering Charles Blanchard’s pig butt are doing all they can to hinder truth and justice…Bob was right in claiming there could be up to 60 different victims, as he probably figured this out long ago…Many cops and detectives have said It’s weird these killings stopped…Looks like they continued but with a whole new game plan, yet the same route of Death, IE STRANGULATION…the Cop that Killed many was a sergeant in the second precinct, and it looks like he made several joyrides down woodward on his way home to Eight mile and Ferndale…hmmm rather suspect considering the Cynthia Coon, Cynthia Cadieux angle at the beginning of child abductions and murders and ending with Tim King and Kimberly King in 1979…Yet in the fall of 79 and all of 1980 there were up to 18 deaths of women in Detroit…Rather telling is two back to back murders with the same last name of Frazier and these poor victims meeting the exact same unfortunate demise…IE a cop with access to names and records…

Coral Watts was only SUPPOSEDLY linked to 4 of these victims??? What about the Rest??? I am passing gods test you TRUCKERS!!!!
NO HEARD FROM DETECTIVE BOB SINCE HE SENT THIS DOCUMENT>>>
http://www.freep.com/assets/freep/pdf/C41960561018.PDF
I’ve been waiting for this day forever, and I’m not about to wait for the police to break the news…
http://deathnotices.michigan.com/view-single.php?id=313911
I used to have one cop suspect, now I have another COP PERP and leader of the PACK!!! So Charles R. Blanchard was a Detroit Cop whom set up Robert L Anglin for Cynthia Cadieux murder…Why did he do that? Because Robert L. Anglin had a daughter with Denise M Blanchard, Charles’ oldest daughter.I”.. She was 13 and had Michele Jean Anglin and she’s linked as living at &^% Gardendale in the 70’s…She’s linked as family to Denise M. Pattyn as that was the name her mother retained after marrying William Pattyn… Michele Jean Anglin is still alive and now Michele Jean Plumb…I’ve tried to contact her and warn her she’s now in danger but I’ve failed in speaking to her by phone…She has a young daughter and husband so hopefully nothing happens to her or her precious family…PUBLIC RECORD, the feds better not kill another innocent victim in order to cover these mountains of lies hiding the real killers..
http://radaris.com/~Michelle-Anglin/301683447
Oh yeah, the trail might end up at the James Blanchard camp, as he might be family with Charles… James grew up in Ferndale…Once I spoke to Debbie Jarvis the feds have been erasing contacts and leads at public records websites to stop the paper trail leading to redemption…
http://www.spokeo.com/James+Blanchard+1
HISTORIC ADDRESS RECORD
SOURCE INFORMATION
Current Date: 07/17/2013
INDIVIDUAL INFORMATION
Name: ANGLIN, MICHELE
Date of Birth: 1971

The feds must be feeling guilty and scared for doing this to Robert Anglin, as it’s been deleted twenty nine times already…
ROBERT ANGLIN better be left alone, as he’s already paid the piper by spending 35 years in prison for a crime he didn’t commit…TRU
Poor dude couldn’t even retain his own counsel…So he’s implicated for a murder based on the words of another felon, yet he can’t hire the lawyer of his choice??? SET UP!!!
http://mi.findacase.com/research/wfrmDocViewer.aspx/xq/fac.19811116_0006.MI.htm/qx
Defendant maintains that the trial court abused its discretion by denying his request for substitution of appointed counsel with the result that defendant had to retain his own counsel. While an indigent defendant is guaranteed the right to be represented by counsel, an accused has no right to have counsel of his own choosing appointed nor does he have the right to have his appointed counsel replaced on a whim.
.
An indigent defendant is not constitutionally entitled to the appointment of an attorney of his choice.
Nevertheless, he may be entitled to have his assigned lawyer replaced upon a showing of adequate cause.
The decision regarding substitution is entrusted to the trial court’s discretion and will not be overturned on appeal absent an abuse of that discretion.
Pill Fickleson, on the Lamb from FBI and Oakland County Cops Covering KILLER COP!!
All of this info is now in the possession of the victim’s families…You Feds covering Peds might try and silence the messenger, but you can’t kill the cause…THIS IS ABOUT MURDERED KIDS, not PROTECTING those whom did it…
The Oakland County Child Killer is Really the AMERICAN LEGION SERIAL KILLER, with 19 kids in the midwest and up to 60 nationwide…
Pamela Hobley, Patricia Spencer, Cynthia Coon, Donna Serra, Cynthia Cadieux, Mark Stebbins, Jane Allen, Jill Robinson, Kristine Mihelich, Tim King, Kimberly King, Dean Peters, Kim Larrow, Laura Wilson, Sandra Butler, Amy Mihaljevic, Tina Harmon, Krista Harrison, Debra Smith…
These are just some of the victims from Michigan and Ohio linked to the American Legion Serial Killer, the victims the system doesn’t give a damn about…WHAT IS WRONG WITH THIS PICTURE??? The system is currently only protecting their own interests…TRUST…
<514 Gardendale – Results.pdf><514 GARDENDALE – Results Summary.pdf>