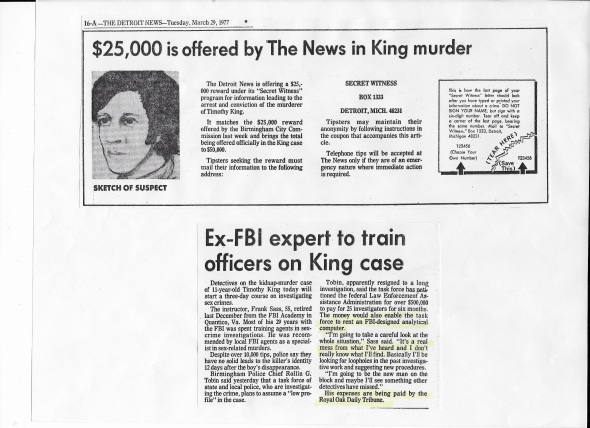 Thank you, Royal Oak Daily Tribune, for paying Frank Sass’ expenses.  Thank you for your brave reporting back in the day.  For your op-ed pieces.  For not being afraid of GM advertising dollars back when GM didn’t suck and was some kind of fucked up god.  Before the home foreclosures of GM execs in the suburbs of Detroit, after their pathetic business model failed to keep up, but after these four kids (and probably more) were murdered by the OCCK.  A killer or killers who, in one way or another, may have been connected to GM.  And thank you for your reporting on the murder of John McKinney in September of 1977.  Your reporting, compared to that of the other bigger area papers, was way more in-depth.  The Fourth Estate, for the most part, failed us the way the cops did.

In fairness, thank you also to The Detroit News for offering this reward.  In fact, I think they may have ended up offering more.  At one point, between The Detroit News, the City of Birmingham, and the Michigan State Police, I believe the reward at one point was up to $100,000.  In late-1970’s dollars.  Who doesn’t touch the reward?  Families with more money than God.  People who know they will die if they come forward ($100K isn’t worth it).  Or maybe someone did come forward with the right information and got blown off by police.  They blew off a lot of people.  Too crazy, too hard to follow, too lazy to double-check.  Someone in the MSP files was entitled to that reward money.

Frank Sass would be 95 or 96 now.  I’m not going to even bother Googling him.  An old FBI man, the odds are that even if he is still alive, no matter what the mess he found with the OCCK investigation, he kept his mouth shut about it. I know the Oakland County Prosecutor’s Office and the Michigan State Police Department are just dragging their feet, waiting for more people to die off.  We all know that’s what you are waiting for.

I know from living through my brother’s kidnapping and murder that life is fragile and short.  How do the rest of you expect to outlive all of us who care about this case and your lies?  The more vocal of us might die before you, but the story will be revealed.  You got a four-decade reprieve.  So many of us got four decades of Hell.  Which is nothing to the Hell those four little kids experienced at the hands of monsters.

But you and the people close to you will be revealed, and called to answer for your silence.  Even if you “dropped the dime” on Chris Busch or another suspect.  You don’t get to play God. If any of the rest of us had done that, we would still be rotting in jail.  You got to keep your law licenses, your professions, and your lives.  Your actions set up this second nightmare and you don’t give a shit, I know that.  You feel like you made the best decision under the circumstances.  You got a second chance.  Mark, Jill, Kris and Tim never got to decide; never got a second chance.  You are not worth more than they are.  You fucked over everyone but yourselves.

Like I said, you don’t give a shit, and I know that.  You are, as you have always been, weak and entitled.  Wait as long as you want, but your part in the story will be revealed.  I promise you, that will happen.  A few more people might have to die before Pandora’s Box opens, but that will also happen.  You might be gone, but your family will be tainted by your silence.  Again, not like you give a shit.  But the truth will own your reputation forever.  Your explanations and excuses will mean nothing because they were used to cover up and defend rape, torture and murder. THAT is your legacy.  And that of the family you leave behind.

I am taking you down Memory Lane again so you can see for yourself (or remember), just how heinous these crimes were and how outrageous the response from Oakland County and the Michigan State Police has been over the decades.  Today, take a look at how the focus was on the blue Gremlin (right, Richard Thompson?!).  There are many, many more examples.  I have posted before about the LeMans that was seen by witnesses at Jill and Tim’s crime scenes, and about the bumper impressions left where Kris’ body was found.  You never heard anybody talking about that, save for the one lone press release from the MSP in the fall of 1977 which was inaccurate (wrong car) and incomplete.  I would argue purposefully so.

Consider also the anonymous information I received relatively recently about GM cars back in the day.

Because the bar has been raised in this case so that only DNA evidence can “solve” it, none of the rest of this matters.  DNA evidence in a case where when it occurred, DNA was just three letters in the alphabet, not an evidentiary avenue.  DNA in a case where the evidence appears to have been mishandled, misfiled and degraded.  In a case police said early and often there was “no evidence,” and the killer was methodical and careful.  In a case where, I am told, the files have been used over the decades in MSP Post Training.  Law enforcement still owes the public an explanation of how the past 41 years have been spent.  If they won’t give it, others are willing to make the case to the public.  I would think they would want to get out in front of this.  The rest of this does matter, in spite of your DNA and “open case” covers.  The truth matters, as I hope you and others will find out. 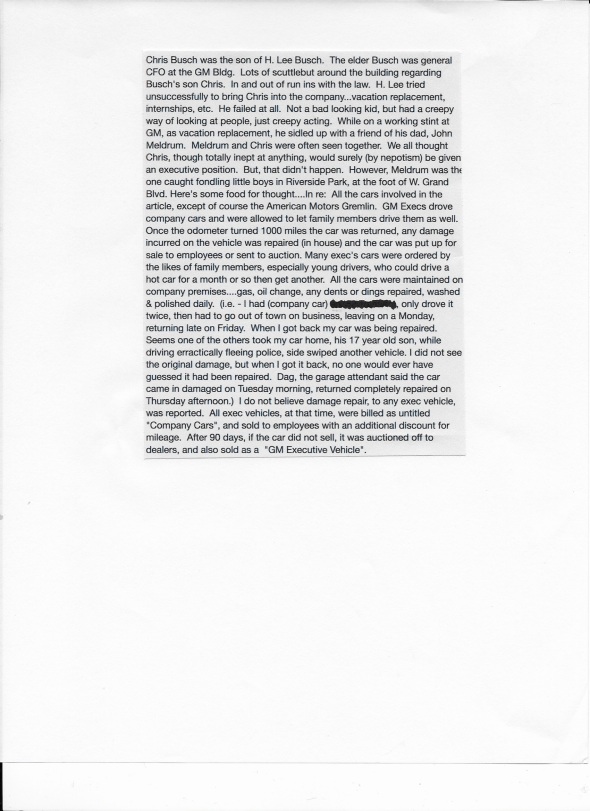 1977 Spring Break in Oakland County, Michigan.  This is what it looked like. 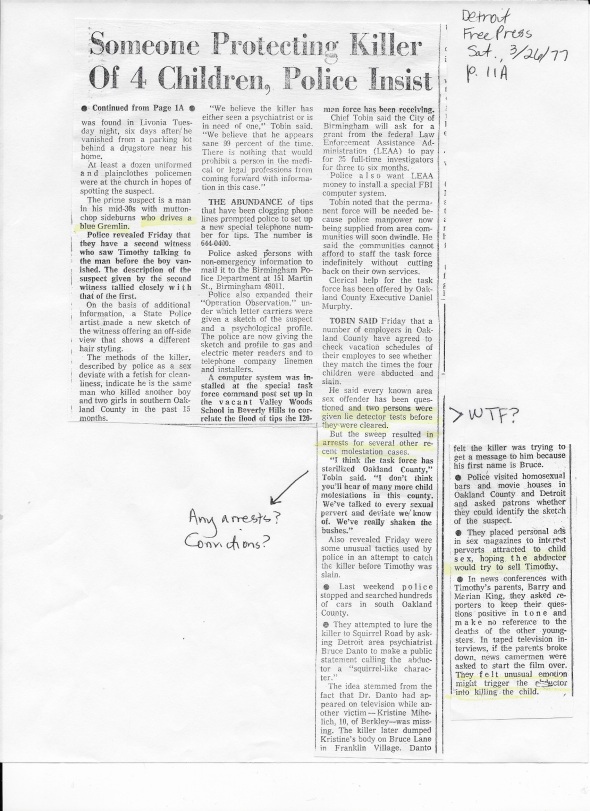 My brother Tim’s body was found in a ditch along Gill Road on March 22, 1977, after six long days being held captive, raped and tortured.  I found this poem in a box of documents my Mother had saved.  It must have meant a lot to my Mom, because she saved it and surely it evoked very painful memories.  Andrea, thank you.

I also ran across an email from a dear friend, who passed away this year.  She was the kind of friend who sent me flowers in March, acknowledging the loss of Tim and the sadness of losing a sibling, a loss society generally ignores.  She ended this particular email (discussing a tip the police disregarded back in the day and again in 2011–and frankly, to this day) by saying “It takes a village to raise a child . . . it will take that same village to finally let him rest in peace.  I was part of that village.”  Thank you, Bridget.

I thought it was awesome that Frances McDormand won the Oscar last night for Best Actress in Three Billboards Outside Ebbing, Missouri.  If you haven’t seen the movie, you should.  McDormand deserved that Oscar.  Sam Rockwell won the Oscar for Best Supporting Actor.  He nailed it, too.

McDormand plays a mother who rents three billboards to call attention to her daughter’s murder after seven months of hearing nothing from police.  Rockwell plays a cop and I will just leave it at that.

I think three billboards on I-75, right before Big Beaver Road (Exit 69 and I am not kidding), would read something like this:

FORTY YEARS AND NO ANSWERS.