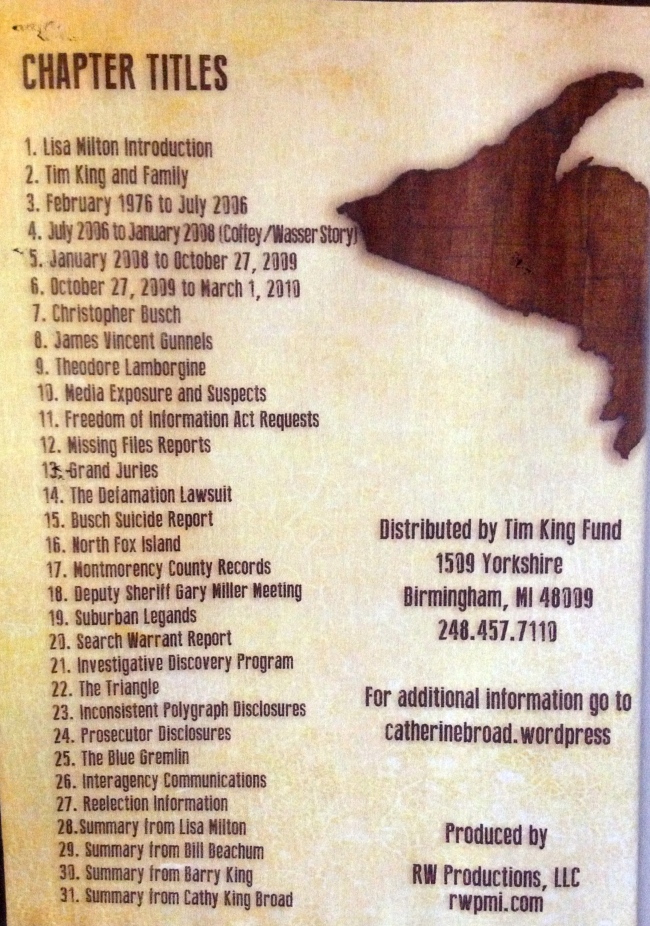 This DVD describes our understanding of and reaction to what we know about the OCCK investigation. We obviously do not have access to what investigators have (or should have). This thing is very complex and convoluted and many issues are not addressed because then it would be a 12-hour DVD. It is light on editing because that adds substantially to the cost. It is what is it.

“If you have information or questions, please contact the Lisle Police Investigations Division . . . or the Naperville Police Department.” 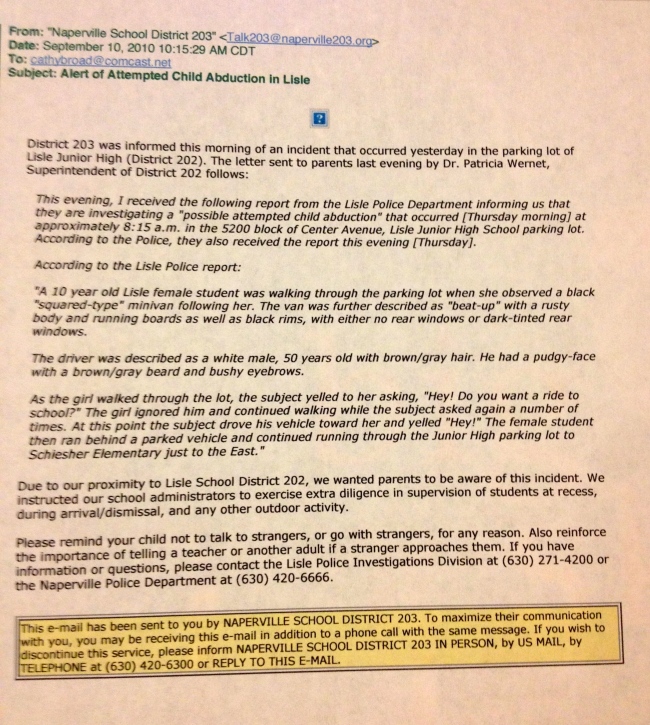 Here is a district-wide email alert of an attempted child abduction in a nearby town I received from our school district a few years ago.  The attempt occurred in the next school district over and our district notified all parents.  Compare it to the notice sent to Quarton school families in my last post.

Like Birmingham, these communities have reason not to fuck around.  Jeanine Nicarico, age 10, was kidnapped, raped and murdered in Naperville, IL, in 1983.  Here’s how the case is described in Wikipedia:

The Jeanine Nicarico murder case was a complex and influential homicide investigation and prosecution which took place in DuPage County, Illinois that sent two men to prison who were later exonerated and released, and contributed to the death penalty moratorium imposed by then-GovernorGeorge H. Ryan.

In July 2009, Brian Dugan pleaded guilty to the murder of Nicarico after having previously confessed to the crime. Dugan is jailed on two unrelated murder charges, one of a 27-year old woman and one which began with the abduction of two seven-year old girls, one of whom escaped and the other of whom was raped and murdered by Dugan. On November 11, 2009, after deliberating about 10 hours over two days, a DuPage County jury sentenced Brian Dugan to death for the rape and murder of Jeanine Nicarico 26 years earlier.

Nicarico was born July 7, 1972 in Naperville, Illinois. She was kidnapped, raped, sodomized, and murdered on February 25, 1983 when her home was burglarized on a day in which she had stayed home from school due to illness. Her body was found two days later along Prairie Path near Eola Rd.[1] Her mom, Pat, an elementary school secretary, spoke with her on the telephone in the early afternoon. Nicarico was kidnapped during the commission of a burglary at her home. Her dad was at work and her sisters were at school.

http://articles.chicagotribune.com/2009-07-29/news/0907280642_1_brian-dugan-jeanine-nicarico-boarding  (“A man in a beat-up blue 1974 American Motors Gremlin had grabbed two little girls off the street in Somonauk as they were riding their bikes.”)

http://articles.chicagotribune.com/2009-10-22/news/0910210838_1_brian-dugan-hugs-jeanine-nicarico  (“On June 2, 1985, Opal Horton was 8 years old, riding her bike with her friend Melissa Ackerman on a gravel road in Somonauk when Dugan stepped from a blue AMC Gremlin, asked the girls for directions uptown and grabbed Opal.”)

“Please continue to have talks with your children about safety and strangers.”

This week a reader sent me a recent stranger-danger alert issued by a Birmingham, MI elementary school.  My brother Tim went to a nearby elementary school until he was abducted and murdered in March 1977.

The principal describes the incident and notes a police report was filed.  Thank god an adult witness intervened.  I have to say that I agree with the reader that, given the dark history in Birmingham surrounding this issue, this was too tame.  I will next post an email alert I received from our school district in Illinois as a contrast.

I hope the Birmingham PD issued an immediate press release in addition to this school alert.  Did an alert go out for the entire school district, or just this school?  This man will just move to another school to try to lure kids.  The press release I received from our district involved an attempted lure in neighboring district.  Was there a description of a car or a license plate?  Did a police sketch artist sit down with these kids and the adult witness?

Communities like Birmingham seem so concerned with the bad press they may get by acknowledging the ugly truth about these incidents, that they throw other potential victims under the bus.  If the communities in Oakland County didn’t have this one hammered home in 1976 and 1977, there is almost no hope.  The reason multiple stranger danger incidents occur in a community is because there is no fear of being noticed or caught by the police. What does that tell you?

I think communities like this tend to have a long, sad history of conveniently sweeping realities under the rug.  Crime prevention involves acknowledging problems, healthy awareness, and high-visibility police patrol.  This is the responsibility we bear on behalf of our children. 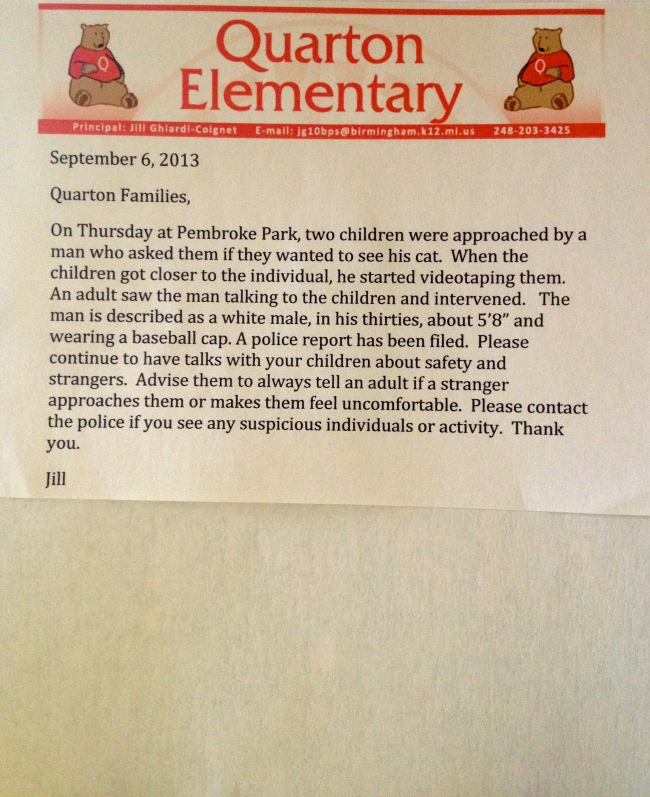