My brothers and I had never been to a funeral before Tim’s funeral on March 25, 1977.  A family friend took my brothers to go buy suits for the service.  I went by myself to a store in downtown Birmingham to buy something black.  I paid for it with a credit card and had to show i.d.  The woman helping me was older than I am now–she had gray hair, I remember that.  She looked at my license and said in the most unbelievably weird, school teacher-esque voice:  “I certainly hope you aren’t related to that little boy who was abducted.”  I told her that, yes, Tim was my little brother.  She was completely flustered after that.  It was the first of many times I would have to navigate inappropriate comments by adults and end up trying to make them feel better after they stepped in it.  I was 17 and I remember thinking “wow, that was so out of line.”

A friend of my Dad’s took me shopping that week to buy a light-blue warm up suit for Tim to be buried in.  We found all kinds of dark-blue warm up suits, but nothing in light-blue.  We went to quite a few stores.  The closest we came was at the Varsity Shop where we found a dark-blue warm up suit, but it was too big.  Tim was 4′ tall and 63 lbs.  The woman waiting on us said that if it was just a little big it would allow for growing room.  We politely declined and gave up.

This man drove all over suburban Detroit after he dropped me off until he found a light-blue warm up suit for Tim.  It was the right color and the right size.  When we saw Tim at the funeral home, he was dressed in the suit this guy found for him.  We did not have a wake. It was just us and my Mom’s sister and brother.

This funeral home is no longer in Birmingham, but a neighbor from our old neighborhood was a funeral director there.  He had kids younger than Tim.  He couldn’t have been kinder or more cool. In hindsight, I don’t know how he did it.  Tim looked larger than he was because god knows what they put in someone’s body to make it look “normal” after an autopsy.  He had a large bruise on the left side of his forehead, shining through the pancake makeup.  He was placed so that his left side was against the wall, away from us.  I had never seen or touched a dead body before.  His hands were incredibly cold.

A limousine picked us up to take us to Holy Name for the funeral service.  First ride in a limo.  My Mom told me not to wear mascara and to bring tissues.  When we got out of the limo, the sound of cameras buzzing was almost overwhelming.  I didn’t realize that when you are “the guests of honor” you walk in after everyone else has been seated–walk past everyone and go to the front row.

The service was in many ways beautiful.  It was multi-denominational and there was a priest from Holy Name, a priest from our old parish, St. Alan’s, as well as a rabbi.  Some cardinal was there, too–a cardinal who I researched and learned approved the transfer of a pedophile priest turned into the task force as a suspect and cleared, to other parishes where he continued to rape boys.

My Mom told me that the guy playing the organ for the service–Mr. Callaghan–said as they were preparing for the service:  “I didn’t know this was going to be a St. Alan’s production,” referring to the fact that the priest from our prior parish would also be officiating.  I believe his son, Sean Callaghan, is the FBI S/A who was most recently assigned to this case, and who, in my opinion, has treated my Dad and one of my brothers like shit.  I keep telling you this whole thing is so bad it is Karmically appalling.

Undercover officers took photos of as many people as they could at the service.  People walking in, people parking nearby, people in the church.  We were all asked to look at these photos after the funeral and identify people we knew.  Those photos are sitting in some goddamn file somewhere and somebody should be going through them again looking for the creeps whose names have bubbled to the surface since 2005.  Plenty of other names have been bandied about since the task force was “rejuvenated” in 2005 in the wake of the arrest and conviction of Richard Lawson (now deceased) and Ted Lamborgine for the rape of many boys in the Detroit area.  But the photos from Tim’s funeral, like those of the men who showed up at the crime scenes (body dumps of Kristine and Tim) are apparently not worth perusing.  Even though the “conventional wisdom” at the time was that this killer was so, so sick that he would in fact show up at his victim’s funeral.

Along those lines, here’s another thing my Mom told me and her sister after we viewed Tim’s body but before his funeral–that some asshole knocked on the door of the funeral home late at night, told the funeral director that he was a relative of Tim’s and had driven all night for the funeral and could he please see and stand near Tim’s body?  God only knows if this was followed up on, but this freak was not one of our relatives.

The headline in the Detroit Free Press on March 26, 1977, the day after Tim’s funeral read:  “Someone Protecting Slayer of 4 Children, Police Insist.”  Ya think?!  A photo shows a young boy looking at Tim’s coffin with the most terrifying look on his face.  Tim’s coffin is covered in flowers, and a floral rendition of a big baseball bat and baseball–his favorite sport was baseball.  The photo caption reads:  “A hockey teammate says goodbye to Timothy King.  He is wearing team jacket–the same one worn by Timothy when he was last seen alive and when his body was found Tuesday night.”

Sunlight streamed trough the stained-lass window of the suburban church and played tinted patterns across the plain white coffin of the murdered boy.  Atop the casket sat flower replicas of the child’s most treasured possessions–his baseball bat and ball.

Once, when he was asked to draw his picture of God, the bright, athletic sixth-grader at Adams Elementary School in Birmingham depicted God as a baseball player.  ‘Now that is what I call knowing God.  There is nothing complicated about God,’ the Rev. Robert Burke [the priest the old organ player was so bent out of shape about having present] told some 400 people.  They were gathered in Holy Name Roman Catholic Church in Birmingham for the funeral of the fourth south Oakland County child to fall victim to a twisted killer.

Timothy King’s still-warm body was found on a gravel road in Livonia in northwestern Oakland County  Tuesday night, six days after he disappeared after leaving a Birmingham drugstore where he had gone to buy candy.

An autopsy showed the popular, straight-A student had been smothered only a few hours before his body was found.

Tim’s parents, Marian and Barry King, sat at the front of the church with their other children, Kathy, 17; Christopher, 16, and Mark, 14.  The sunlight that illuminated Tim’s casket also touched the family and the two people sitting with them–Barry King’s father and a Birmingham plainclothes policeman who has been living with the family since the boy was found.

A few rows away, the pews were filled by boys in bright red jackets, all members of Tim’s hockey team.  The casket, which was carried into the church to the strains of a violin playing Bach’s ‘Be Thou with Them,’ was carried by six friends.

About a dozen other plainclothes policemen were inside the church and a dozen uniformed officers patrolled outside. 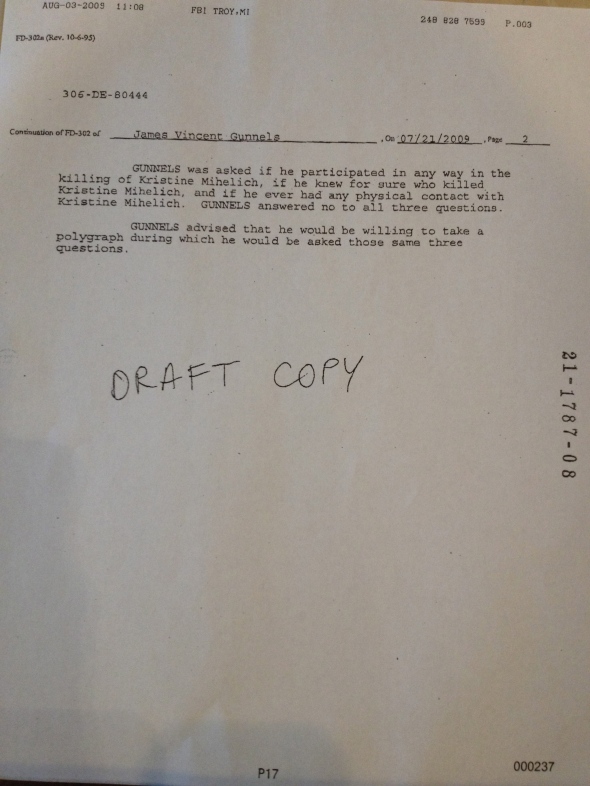 The Oakland County Prosecutor recently responded to my Dad’s Freedom of Information Act (FOIA) request for documents provided to two media outlets in response to their FOIA requests (including the FOIA requests themselves).  This time she did not object, necessitating yet another trip to court.  After all, they provided this information to the media, so there was no way to make a strained argument that the father of a victim could not receive these same documents.  Most of them are documents we have already seen in the MSP files, however, the OCP wasn’t as heavy with the black magic marker.  They are basically un-redacted.  This gets interesting with the report on Vince Gunnels’ second polygraph (another post).  For now, consider this supplemental report by Jr. Brandenburg of the Montmorency Sheriff Department dated March 3, 1977.  This explains, among other things, why on March 19, 1977, the party store owner up north knew Chris Busch should not have been in the presence of minors, and why she begged police to go check out the cabin at Ess Lake.

Interview with Christopher B. Busch, on 3-3-77 at 2:30 PM.  I gave Mr. Busch his Miranda Warnings, I asked him if he would give me a written statement, on the incident at Ess Lake, with James V. Gunnels.  Mr. Busch said, I will not give any written statements until I talk to my attorney.  All I can say is that I did not use any force on James at the Cabin.  Chris stated that he did not have any local boys at Ess Lake at any time.  All the boys were from down State.  He would not mention any names of them.  Busch said he knew Gregory Green, at no time did he bring him to Ess Lake.  He said that Green was violent, and had tried to strangle a subj in Flint Michi he believed it was Kenneth Bowman.  Busch said the cops have all his movies and photographs, and are holding them.  Said he did not have any at the Cabin.  Chris stated that his problem started when he was 17 yrs, at a boarding school.  His father has had a Cabin on Ess Lake for 12 yrs and he likes it.  Chris said he had his first woman at the Cabin two weeks ago.